2018 UPDATE: The time spent in Paris last year (2017) changed the trajectory of my work, by expanding it greatly. I now have a website hosted by the French OpenTeam: www.openteam.co/alanalea

And thanks to OpenTeam, I was able to participate in COP23 in Bonn, where I became the producer of a side-event for Project Drawdown.

Beyond that, in the interest of bringing this post up to date, French President Emmanuel Macron has been in the United States for the last few days, offering the symbolic planting of a tree on the White House grounds, and giving a rousing talk to the US Congress.

2017: You’ve probably seen this clip by now, and heard these words, spoken within hours after the US withdrew from the Paris Climate Agreement by Emmanuel Macron, President of France.

“To all scientists, engineers, entrepreneurs, responsible citizens who were disappointed by the decision of the president of the United States, I want to say that they will find in France a second homeland,” he continued. “I call on them: come and work here with us. To work together on concrete solutions for our climate, our environment. I can assure you, France will not give up the fight.” 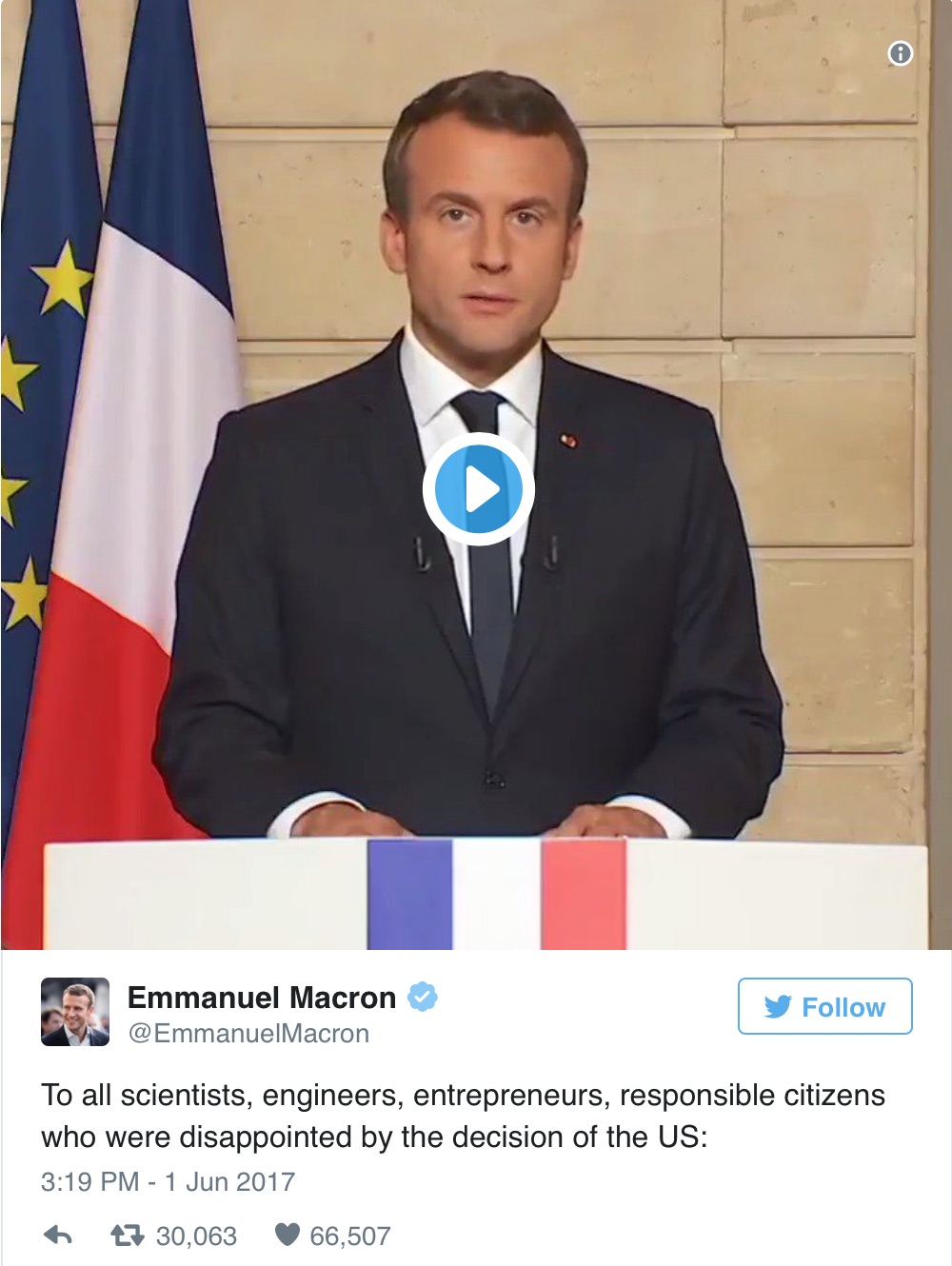 And while this was going on, so was the preparation of a letter of invitation by my colleagues in Paris, who are asking me to come there to work with them as soon as possible.

I could leave for Paris as soon as this month to begin working on behalf of a multitude of small projects –– citizen initiatives like iGiveTrees –– who were also recognized by the French Ministry of Environment for their efforts, and are struggling for funding. OpenTeam writes:

“Open Team recognizes her as a “pollinator” who is able to share resources and build collaborative networks, among players that do their part to mitigate the effects of climate change. As such, we’d value her consultation with us here in Paris, to help us build the pollinator network with the aim to develop the platforms outreach strategy and implementation, boost the support that it brings to projects and thereby multiply the impact of each project.”

Laureate of “100 Projects for the Climate”

with support of the French Ministry of the Environment, Energy and the Se

http://www.100projetspourleclimat.gouv.fr/en/projects/118-i-give-trees
Continuing the momentum of COP 21, “100 projects for climate” aims to speed up the emergence of citizen-led initiatives to combat global warming. This new participative step, building on the valuable discussions of the Paris-Climate Conference, will enable the 100 most innovative solutions from around the world to become a reality.

Please, click the Donate button below and join our monthly giving campaign or make a one-time donation.

Help sponsor the gift of native species trees for a food forest. We’ll be planting 300 native species trees in each plot, with an emphasis on tropical staple tree crops. These will include Coconut, Jackfruit, Avocado, Mango, Papaya, Pitanga, Aurocaria, Fruita de Conde, Jaibuticaba, Banana, Passionflower, Pineapple and many others! This includes the cost of organic soil amendments, mulch and 2 years of maintenance after plantings. Since there’s such a diversity of trees being planted, individual costs vary, so this is a fund toward the whole forest plot, not the cost for one tree. Just click on the photograph to make a one time or monthly donation.

Help sponsor the gift of native species tree seeds. We support back country sustainable seed harvesters who supply their local seed banks and nurseries. These are large bags of seeds, not small packets. The size of the bag depends upon the type of seed, but each one holds approximately 1,000 seeds. This is the way we protect biodiversity. Just click on the photograph to make a one time or monthly donation.